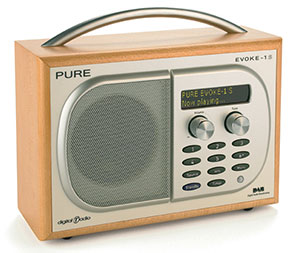 Sporting the same bedroom-friendly real wood, cherry veneer casework, the TEMPUS-1S hopes to soothe twitchy sleepers and all-night insomniacs into a deep slumber with its collection of ‘Natural Sounds.’
END_OF_DOCUMENT_TOKEN_TO_BE_REPLACED 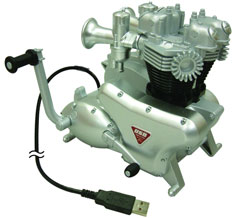 We’ve always got time for thoroughly pointless USB gadgets and they don’t come much more pointless than the Cube Collection’s USB Engine Hub.

Designed for people dissatisfied with the aesthetic experience of plugging in USB peripherals, the USB Engine Hub turns the everyday act of plugging in a printer or a scanner into a piece of high octane motorcycle performance art, complete with sound effects, a working kickstart and gears.
END_OF_DOCUMENT_TOKEN_TO_BE_REPLACED

Miglia has released a hard drive unit for the Mac Mini that sits underneath the Mini, matching its styling.
END_OF_DOCUMENT_TOKEN_TO_BE_REPLACED 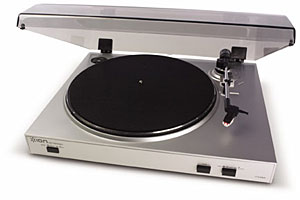 Hoping to tempt the kids to start playing the vinyl they’ve bought is Ion Audio who have knocked out two new versions of its popular iTT USB turntable.

END_OF_DOCUMENT_TOKEN_TO_BE_REPLACED

You can always rely on Brando to bring a smile to your face with some completely daft USB gizmo, and once again they haven’t disappointed with the release of their USB Roll-Up Drum Kit and keyboard.

Ginger Baker on a mat
We can’t imagine many people sitting at home and thinking to themselves, “You know what? I could really use a plastic roll up drumkit to hit”, but if you are one of those strange people, prepare to get percussin’
END_OF_DOCUMENT_TOKEN_TO_BE_REPLACED

To old school computing bods like us, it doesn’t seem that long ago that floppy disks were the main way you lugged your data around.

With its feeble 1.44MB storage space, that often meant you had to cart around great boxes of the things.

And with its gnat-like storage capacity, installing programs like Photoshop meant a lengthy spell sat by your machine, patiently feeding in a vast amount of grinding floppies and hoping that the last one in wouldn’t display a dastardly disk error.

Come 1994, the hi tech hotshots around town were sporting Iomega Zip drives, which served up a comparatively capacious 100MB of storage space (rising to 750MB in the final versions).

Although we felt the love for the increased capacity, the drive was quite a bulky beast, the disks weren’t cheap and folks lived in fear of suffering the dreaded click of death.

By the late 1990s, recordable CDs, cheap flash memory and external hard drives had become the modus operandi for portable storage users, although bigger and bigger files meant that the things soon filled up.

With this in mind, Toshiba – the world’s fifth-largest hard drive manufacturer – has decided to elbow its way into the portable drive market with its 2.5-inch USB 2.0 portable external hard drive offering a positively palatial 200GB of storage space. That works out at 57,000 digital photos, 52,000 MP3 songs or 88 DVD videos all wedged into its slimline case (approx 6″x4″x0.9″).

Claimed to offer the highest capacity of any backup solution in the compact 2.5-inch hard drive class, the 200GB beastie comes clad in a sleek vented black aluminum exterior, backed by a patent-pending shock mount system for extra protection.

The USB 2.0 drive also comes bundled with the NTI Shadow software which makes it a cinch to set up a back up schedule.

For those of you who have been wondering who will be supplying the software to Miglia following their falling out with Elgato, you need wait no longer. 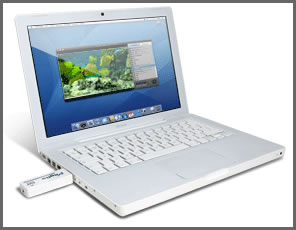 Miglia have not only signed a deal with software suppliers Equinux, but have a package available already with the software, called The Tube. They’re calling the hardware and software bundle the TVMini Express.

Simon Ellson, CEO, Miglia Technology enthused about their new partners, “‘TV from a different perspective’ is our mantra and Equinux undoubtedly provides the most effective ‘starter’ application to allow Miglia customers to watch, record and put TV on their iPod, easily.” 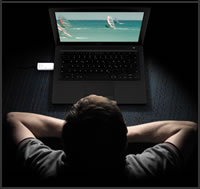 Equinux are confident with the swift reaction of the software, as they tell us it was written “from the ground up” in Cocoa, Apple’s object-oriented application environment designed specifically for developing Mac OS X-only native applications. ie it wasn’t written for Windows and ported over to the Mac.

All of our US readers who might be getting excited about this will have to bite their hands in frustration. As Equinux point out at the bottom of their page, “DVB-T is not available in the US, Canada and some other regions, so TubeStick will not work in those countries.”

One of our limited number of gripes (thinking about it, it was the only one) we had with the Polycom Communicator was that it was only supported on the Windows platform. 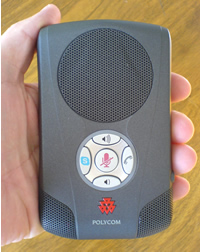 We mourned the lack of Mac and Linux support. Given that all Polycom needed to do was write a driver or two to get it running, we were disappointed that there was no movement on this yesterday.

We got in contact with a Little Bird that’s connected to the company, and after some goading, we heard that Polycom _are_ working on the missing USB drivers. They came close to assuring us that the Mac support should be available this year. There was a lot less certainty about the Linux support.

We want to stress that there’s no official word on this as yet, but we’ve got reasonably high confidence in our source.

Vista Stinks
A point of interest. When we tried to install the Communicator on Windows Vista we found that there wasn’t a driver available for Vista as yet (frankly not a unique outcome with Vista).

We’ve just heard from Elgato that they are terminating their relationship. Although we’ve been told that the contract ended on 7 February, it’s only just being discussed publicly now.

Until then, Miglia has been bundling Elgato’s TVEye software with their digital TV DVB-T/Freeview/TNT tuners.

Wanting further details, we first spoke to Miglia, who told us they could say nothing until a press release is issued tomorrow.

A call to Elgato gave us slightly more information, but they were restrained by the non-disclosure agreement between the two parties.

Looking on the bright side, they said that “The OEM business is only one part of our business. The bigger part is selling our own hardware with our software, which we will continue to do.”

The official statement from Elgato is

Elgato Systems announces that it has terminated the licensing agreement for EyeTV software with Miglia Technology, Ltd. Miglia can no longer ship, sell or advertise TV Tuner solutions bundled with Elgato’s EyeTV software.

We’re waiting to hear back from Miglia which software they will be shipping with their product in the future.

Guitar bands may well be back in, but all those clunky effects pedals and old-school spaghetti cables are unlikely to impress the chix at the front, so aspiring Rock Gods may want to check out the new iAxe USB Guitar. 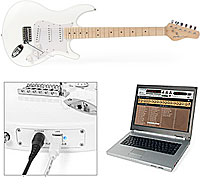 As the name suggests, this Strat-shaped guitar comes with a USB port, allowing aspiring six string warriors to plug into their laptops and access a host of cool effects.

The guitar certainly looks the part, sporting a maple neck, solid body, single-coil pickups with 5-way switching, shiny chrome machine heads and a whammy bar letting you go for a bite while the sustain continues making that ‘eeeeeeeee’ sound.

The ‘idiot proof’ software supplied lets bedroom plank spankers jam along to their own music, with the ability to slow down or speed up tracks to learn those tricky licks and difficult ‘shapes’.

If your neighbours aren’t down with your late night, death metal interpretations of teenage angst expressed through the medium of a heavy fuzzbox effect, there’s a handy headphone socket to help keep the noise down to minus eleven.

The sound may well be Shea Stadium, but at just £99 the price is definitely Bull & Gate, and the USB iAxe is available now for wannabe six string renegades on the highway to desolation from online widget merchants, Firebox.