Vodafone has made three days of surprising announcements. Three of them for Web services soon to be accessible over their mobile network (MySpace, eBay and YouTube) and the other relating to the building out of their 3G networks in the future (analysis). 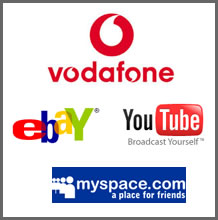 We thought it would be worthwhile taking a look as to why this might be happening and why it’s come at this time.

Why the push?
Well, lots of other companies are moving in to tread on Vodafone’s toes – example – Virgin Mobile now with NTL/Telewest TV/broadband/telephone service – as all forms of communication converge.

Vodafone is pretty much a mobile only company. They’re trying to change this, through deals with BT to offer fixed-line broadband and similar offerings in Italy and Germany. In the converged game, they’re pretty weak.

This weakness is leaving their previous highly-profitable dominance of the mobile space threatened.

They’ve been aware of the benefit of differentiating their service through providing access to content for a while, but these recent moves mark a serious step forward.

Previously it’s been about them providing the means of accessing content from third parties, games, music, etc. These most recent deals are about access to services.

What’s the benefit?
There’s many advantages to Vodafone on this.

Short term it’s about making people associate Vodafone with being on the leading-edge – “Wow, they’ve got MySpace and YouTube!”

It’s unclear how far this benefit will extend into the future, as more phones become easier to browse the Web, where these services live.

eBay, MySpace and YouTube all have fanatical following. When people become embroiled in them, they _must_ find out what has _just_ happened. They’re a modern day replacement for TV soap-operas.

Obsessions like these drive people to choose mobile phones that enable them to get access – and Vodafone will be shouting this from the roof tops to encourage people to switch to them.

Interestingly, those three services are also used by a great deal of people who don’t have a strong technical understanding. People who don’t know that the whole Internet is available through the Web Browser on their mobile phone. This changing is just a matter of time.

Another short-term benefit for them is the amount of revenue they’ll end up generating. We imagine that it’s cost Vodafone a pretty penny to get exclusives from all three services, but this will be made up by the seriously boosted data charges that they’ll be clawing in.

MySpace is pretty rich with bandwidth hungry media – lots of photos, and many many pages to check. Same for eBay.

The real earner for them will be YouTube. You’ll struggle to find an application that uses as much data as video and with the ability to pass links to favourite videos, subscribers will be helping their friends run up big data charges too.