As has been mentioned on Digital-Lifestyles, Orange and Vodafone have entered into an agreement to share their 3G Radio Access Network (or RAN). We thought you’d appreciate some more depth … and who better to give it than Steve Kennedy, our telco guru. 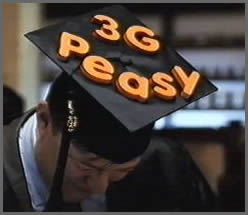 Currently Vodafone have a bigger network than Orange, so Orange would gain more than Vodafone from the deal, but in future it means that new cell sites will be used by both operators.

The agreement could have covered 2G (GSM) too, but as Vodafone use 900MHz systems and Orange use different systems operating in the 1800MHz band, it just not possible. That said, it’s likely future technology would allow both sets of frequencies to operate within the same radio equipment.

Once the network is in place, each network will be responsible for enabling their own network services and ensuring quality of service, etc. As competition for customers increases this is a sensible way for operators to reduce cost, share the infrastructure and compete on service. It’s a shame the fixed networks don’t take this view, as has been pointed out before, the LLU operators could join forces and build a joint LLU network and then compete on service. This might give them a larger network, which would be of a size and scale to compete with BT’s upcoming 21CN.

Why the rush to build?
With a 3G license comes obligations and one of these was to reach 80% of the population by the 1st Dec, 2007. Though the GSM network coverage hit that a while ago, 3G expansion has been slower with few customers really wanting 3G services so the operators have built 3G networks in densely populated areas where they can make revenue from those customers. That means big cities have been covered, but elsewhere 3G coverage is patchy to say the least.

Hutchinson 3G (or 3 the new entrant into the mobile world) has been rapidly building its customer base and building a network to match. In June 2004, Ofcom tried rules that 3 had SMP (significant market power) in the 3G world, which meant it would be regulated by Ofcom much in the same way BT is for fixed networks. The other 3G operators happily supported Ofcom in this view. 3 didn’t want the increased regulatory burden and disagreed with Ofcom’s ruling, so appealed to the Competition Appeal Tribunal. They won their appeal in November 2005. This was the first time any network has successfully appealed against a SMP designation.

3 wasn’t happy about having SMP forced upon it and therefore made noises to Ofcom about coverage obligations, which the other networks weren’t meeting. They’ve got 10 months to hit that 80% figure.

Though city centres might have a demand for 3G (for data services, no one cares about 3G voice – a voice call sounds the same whether it’s 3G or GSM), as you leave dense urban areas the appeal of 3G is less. Well maybe not less, but there are less people to use it and less of a reason for the networks to install 3G infrastructure and sites.

The cost of a 3G cell is probably not much different in terms of equipment from that of a 2G cell, one major difference is the amount of bandwidth needed for the cell, as data volumes are significantly higher (maybe 40Kb/s using GPRS data compared to maybe 2Mb/s for 3G, multiply that by 10 users and it’s 400Kb/s compared to 200Mb/s).

UK backhaul (i.e. the pipes used to connect cells) are expensive. The more rural the cell site is. the less chance there is that anyone (except maybe BT) has got any kind of high bandwidth connectivity. Therefore, the costs of the backhaul may well exceed that of the cell site itself.

In this climate of everyone’s customers wanting everything for nothing, being able to reduce your build costs may well be the straw that doesn’t break the camel’s back.

One thought on “Vodafone And Orange 3G RAN Share: Examined”