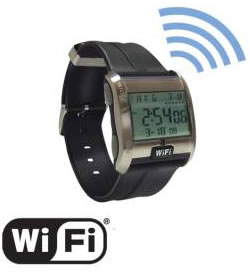 OK, we were all very excited about the idea of a WiFi detectors when we first saw the pocket-sized version and a couple of the subsequent ones. Finally it would be possible to work out where to connect, without first having to get your laptop out to … work out where there was some wireless.

Then the joy went out of it as tons of the things arrived, with the occassional exception … or two.

Here’s another interesting one, a WiFi-detecting watch … that’ll be a watch … that’s a WiFi detector as well.

A pretty nifty one if you’re going secret squirrel.

If you fancy one, it’s looks like you’ll have to bide your time while they get them back in stock.