Google is to collaborate with MySpace on OpenSocial, an Open Platform for Social Application Development.

Using Opensocial, the developer of applications will be able to have it interact with any social network site that supports the OpenSocial, at this time giving access to over 200 million users.

Both parties have a reason to work on this and try to make it a standard. If programmers are able to code in HTML + Javascript, they’ll be able to create these applications.

The core services cover the four areas, three of which are obvious – People (Who am I); Friends (who do I know); and activities (what am I doing). The last is Persistence – not needing to have access to the servers (ie be online) to make the applications work.

If you want to learn what Google are doing with OpenSocial and have around an hour spare to view it, there’s a video at the end that will give you an overview. 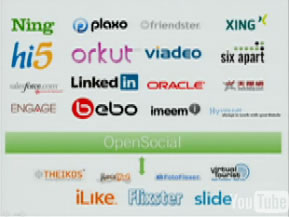 Why OpenSocial Now?
Some people feel that Google is in a strop because they didn’t get the bit of Facebook that Microsoft did, while MySpace is clearly threatened by Facebook, and the near wholesale movement of people from one to the other.

Google have their own social network Orkut, which has in the UK & US never really gained the traction it required to become dominant – in other countries it is more popular. Without a dominant position, Google have nothing to lose in using the experience they have with Orkut, but effectively going ‘over the top’ of other social networks.

One area where Facebook is stamping all over MySpace is the open market that Facebook has created in ‘applications’ that people can load on to their Facebook pages. With an API, developers external to Facebook can create these apps at will – elevating Facebook from a Web site, to a platform for growth.

Interesting, but not surprising to see that Facebook isn’t part of the party. As to how long they’ll stay away from the party will be more revealing.