Sky has made the decision to scrap the subscription charge for the Sky+ PVR service starting 1 July 2007.

Since its inception in 2001, Sky has been charging users of the Sky+ service £10 per month to keep using it, this includes receiving the EPG information, required to drive the service.

There’s no doubt that Sky+ is a highly polished product that’s been extended to now include remote programming via mobile phone or PC, but as to why Sky might be moving to give the service away is a little more unclear. 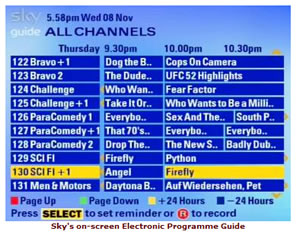 Not known as giving money away for the sake of it, the official reasoning

Many of you have said that you want Sky+, but to get it, it needs to be more affordable. We believe that by removing the Sky+ subscription cost for Sky Digital customers, it will mean that more of you are able to enjoy the benefits of Sky+.”

doesn’t really give the whole picture.

We think it’s a reaction to the extra pressure that Sky is feeling from other competitors – such as their non-friends, Virgin Media and BT Vision, who have just launched a significant advertising campaign which will see them giving away a PVR. Sky will continue to charge £99 for the Sky+ box – as well as charge monthly for the actual Sky TV service.