Skype has announced that its VoIP software has been downloaded over 500 million times since its inception in August 2003. 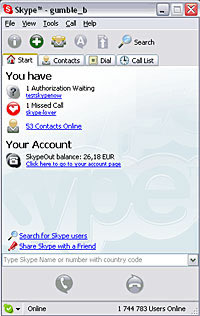 A pretty staggering number, even when you realise that it includes all of the downloads and possibly all upgrades of the software (* We’re in the process of checking this with Skype HQ).

Working out that this averages just under 11m downloads per month is pretty meaningless, as in the early days there were very few people knowing about Skype, or even how to pronounce it. In the early days some numpties called it Skype-eee – and we bet that the guilty keep that one quiet these days.

Some numbers that are worth looking at – because they’re pretty mind blowing – are that Skype is being downloaded at the rate of six times per second; Skype to Skype minutes in Q4 2006 alone totalled 7.6 billion minutes; and in September 2005, Skype had 54 million registered users. Today it has over 171 million registered users worldwide.

Skype CEO and co-founder Niklas Zennström shares the love and enthused, “The entire Skype team owes its success to the global community of registered users we have today who tell their loved ones how much they enjoy using Skype.”

The original Skype users were mostly people who had used Zennström previously wildly popular product, Kazza, a P2P file-sharing application. Much of the knowledge his team had built up in handling considerable amount of data sharing between machines was invaluable in building the bones of Skype.

Skype is now just part of everyday life. A product that you couldn’t imagine being without. A pretty impressive feat in anyones book.