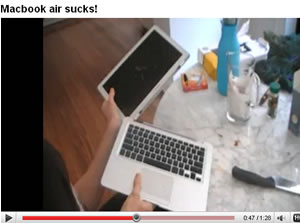 You can’t have failed to have noticed that ‘social advertising,’ is the flavour of the month year.

You know the type of thing – ‘edgy’ videos made to look like that they’ve been shot by an amateur on a wobbly handy cam, like Samsung did with their LED sheep video (which possibily was shot by farmers) and Samsung kind of did with their HD Phone.

Macbook air sucks! video
Today we saw a Tweet (Thx @iowaug) pointing us to a video …


The vid
As you’ll have seen, the protagonist expresses his frustration at his Apple Air laptop, telling us that six of his friends have also had the same problem with a broken hinge on the Air.

His rather extreme reaction is to take up a considerably-bladed kitchen knife driving it through the screen – a screen which does a great job of still working after the first stab.

He then reaches over, picks up an IBM laptop x300 (which looks considerably less glamorous that the Air).

We’re then told via text typed to the screen how great the x300 is.

The camera pulls away to reveal a decent/good looking young man smiling happily. 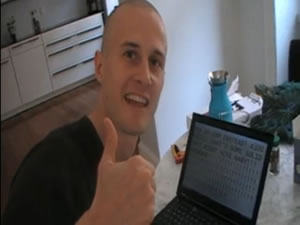 Real or advertising?
Our question – is this just a happy knife-wielding over-reactionary (an Air is after all not a cheap bit of kit to dispose of like that)? or is he a paid participant? After all, it wouldn’t be the first time it’s happened.

Is it a more-edgy reaction to the I’m a Mac, I’m a PC campaign?

Over-analysing further, it’s interesting to note that the words are not spoken by said bloke, but as you have to read the text from the screen, the voice saying these messages to you, is in fact your own. You’re effectively telling yourself to ‘Buy an IBM instead.’ Pretty powerful.