The UK equivalent of the Apple US Switch campaign was launched today in the UK. Featuring Mitchell & Webb, well known and highly-respected UK comics, they maintain the signature people-standing-in-front–of-a-white-backgrounds look of other Apple campaigns.

The casting is perfect, with the PC played by David Mitchell and Robert Webb being the Mac – the business/casual roles they played in the genius TV venture, Peep Show. 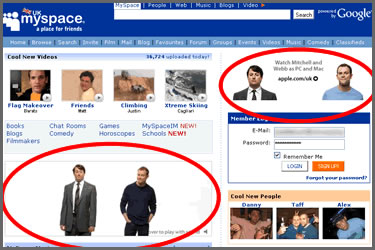 Apple must be spending large on this as it’s all over the UK MySpace pages, with double ads showing on a lot of the pages.

Clearly riding on the shirt-tails of the world’s obsession with iPods, through this campaign Apple, are attempting to persuade iPod-owners that their computing lives could be just as beautiful as their music lives. By the look of the last Quarter’s figures from Apple, where they sold just over a million Macs and over 21 million iPods, it’s not a bad idea to increase your computer sales.

There’s three campaigns in the wild at the moment, Restart; Virus and Office, are all worth a watch. Luckily someone (just perhaps, just perhaps, the advertising company!) has put the adverts up on YouTube – a pretty neat trick for something that hasn’t been on TV yet.

Restart plays on the fact that PCs freeze and often crash during use, while Macs don’t suffer this to the same degree – although it’s not unknown.

Virus takes great delight in the 140k new viruses that were created for PCs last year, while the number of Mac viruses remains minimal – something that might change if lots more people starts buying Macs.

Office encourages people to detach their home PCs from being associated from the work PC, which is normally a PC – what this will do to people who have Macs at work is yet to be established.

Quite what Mitchell thinks of being cast as the dorky PC is unknown, but we suspect he’ll be mopping up his tears with his bulging appearance fee cheque.

Apple also have it all over their site.