A few bods in Australia got together after hearing that the Google Maps satellite which it takes images from was going to be passing over Sydney.

Their mission? To create a giant graphic, so it would be picked up and be viewable on Google Maps.

It’s not the first time anyone has thought of the idea of course (we’ve all done this at Digital-Lifestyles towers), but these characters actually got off their behinds and did it. 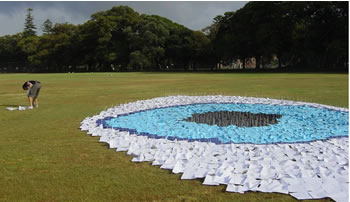 It appeared on the tech discussion board Slashdot, and subsequently was hit with a ton of comments accusing them of “spamming Google Maps.” You’ll know that we hate spam (natch), but we fail to see why some of the commenters are getting so irate.

As one of the comments pointed out, they don’t really have to wait for the map to appear on Google Maps – they’ve gained loads of it from the stunt alone.

Read more on their posting about it.