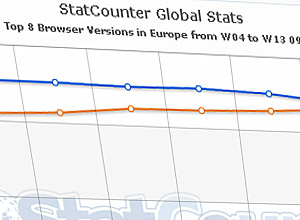 Mozilla’s Firefox 3.0 has now officially become the number uno web browser in Europe, according to the latest figures from StatCounter.

Although Microsoft – once supreme rulers of all things browser-related – still rock the market if you add together all the various versions of Internet Explorer still in use, Firefox 3.0 is the most popular individual browser version.

Although their lead over the former leader, IE 7.0 is tighter than a crab’s nether regions it shows the increasing popularity of Mozilla’s Firefox browser, whose first version of the browser was introduced back in November 2004.

The next four most popular browsers are Firefox v2.0 with a 3.1per cent share, with rising new boy IE 8.0 securing a 2.37 share, while Apple’s Safari 3.2 has to settle for a relatively miniscule 1.4 per cent stake. 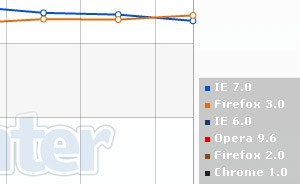 “The data shows that Firefox is closing the gap and is now just 10% behind all IE versions in Europe,” he explained.

One thought on “Firefox v3 becomes Europe’s Number One Browser”