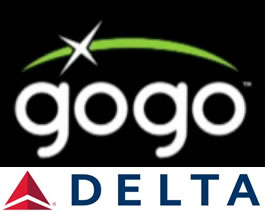 It looks like WiFi on planes is starting to be rolled out again.

US operator Delta Airlines is to offer WiFi Internet access across their fleet of planes using AirCell’s Gogo service.

Going mad in corporate-eez, Richard Anderson, Delta’s chief executive officer, blabbed, “Delta remains committed to providing a travel experience that maximizes the time our customers spend with us onboard by offering them even more productivity options” – translated – we’re going to offer WiFi to people who fly on our planes.

Starting in Autumn unlimited data access on flights of three hours or less will cost $9.99, over that it will be $12.99.

Didn’t there used to be WiFi on planes?
Way back in 2005, United had the first flight to have officially-certified WiFi onboard.

Indeed I was hyper-excited when I had the chance to use WiFi onboard a flight to Japan back in 2005 … despite it’s $30 cost.

By the closing months of 2006, on-plane WiFi provider, Connexion was claiming that there wasn’t enough interest in the service, so discontinued it.

At the time it was felt by many that removing WiFi from flight was more to do with ‘terrorism’ concerns, or protecting the very profitable ini-flight phone service than a lack of interest in it.

Great news to see it back.