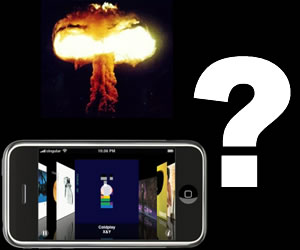 Given the media’s initial blind obsession with the iPhone, writing about it as if it were the third-coming, it’s not surprising that, true to form, they’re now getting overheated with a possible bad news story.

It centers on an apparent “Kill Switch,” that _might_ be used to kill applications on the iPhone.

The source of the information is some digging around in the guts of the iPhone that Jonathan Zdziarski has been doing.

He’s found a directory on the iPhone that contains, he says “a cache of unauthorized applications and a URL to a page on Apple’s servers where it is apparently downloaded from time to time.”

Keeping a level head he points out, “That’s all we know – nothing more. We do not know whether this mechanism is active, or what exactly it does.”

From this little nugget, the media has spun all sorts of stories about how Apple could kill any application on the iPhone … even if you’ve paid for it, shock horror.

The Actual facts
What has actually been established by Zdziarski is that he’s been able to “effectively kill” any application that tries to use the GPS, which includes Google Maps.

Whatever the point of the supposed Kill Switch, Zdziarski concludes that “the idea that Apple can choose what functionality my applications should have frightens me.”

Digital-Lifestyles find it hardly surprising that Apple might build this kind of facility into the iPhone. As can be seen from their fanatical secrecy over information about their forth coming products, they’re not a company that doesn’t like being in control.

For Jonathan Zdziarski, it’s been a fantastic way to generate widespread publicity, something pretty useful, given he’s got a book soon to be launched about iPhone Forensics.