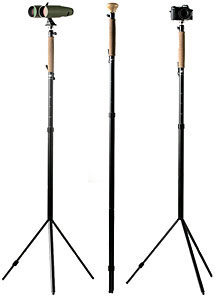 For ramblers, hikers and general all-terrain rugged folks looking to capture some outdoors photography, lugging a decent tripod around can be a bit of a chore, so Trek Technologies are hoping that their hybrid tripod/walking stick will prove a hit.

A hybrid what do we hear you ask? Well, indeed. It might seem like a curious creation on paper but it’s even weirder when you get your hands on the thing. For starters, it’s not so much a walking stick as a ruddy great staff that looks like it should be waved about by Charlton Heston as he busies himself parting the Red Sea.

We mean, it’s BIG. If you went for a Sunday stroll around town with this flagpole-like thing in your hand, you should expect a chorus of tittering at your every step, and if you strolled around a farm, don’t be surprised to find a flock of sheep assembling behind you, awaiting your instruction.

So the TrekPod really is for beefy wilderness wanderers rather than suburban strollers – although we have some doubts that anyone anywhere would want to haul such a large piece of scaffolding around in the wild for long.

Construction
The 30 ounce, aluminum TrekPod appears to be well built, with a locking nut near the middle allowing for height adjustment from 43″ to 57.5″ when in tripod mode or up to 62.5″ in monopod mode. The TrekPod can be quickly disassembled into two shorter 35.5″ lengths for carrying.

At the top of the staff is a chunky contoured palm rest covered in natural cork. Removing this gives access to the pivoting MagMount Ball head, which comes with a silver adapter for lighter digital cameras and a black one for heavier cameras, spotting scopes and binoculars up to 9 pounds in weight 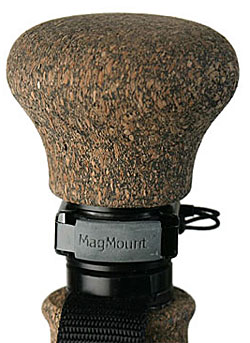 The tripod mount snaps on to the Ball Head courtesy of an extremely strong rare earth magnet that binds the two together in a mighty Vulcan grip – it’s so strong that it’s very difficult to prise the two apart unless you have a camera attached.

The strength of the magnet might cause concern for anyone using magnetic recording media – in fact, the wafer thin paper manual warns users that it could, in close proximity, ’cause damage to a pacemaker’ or affect credit cards ‘and some digital video cameras.’

However, the manual goes on to say that the magnet will cause no harm to digital or film media, “even in direct physical contact” and to prove the point, they lined up a series of pictures with memory cards stuck on top of the mount.

Tripod
As a monopod, the TrekPod works reasonably well, but the real selling point is the pop-out legs which convert the walking stick into a tripod of sorts.

In the walking stick position, the tripod legs are bound together at the base by a piece of Velcro, and removing this strip releases the legs which then have to be manually pulled into shape. 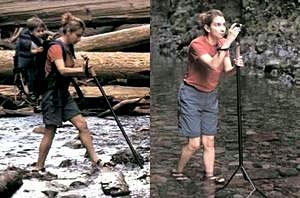 With the tripod legs sticking out of the bottom quarter of the pole, it makes for rather a strange sight, but we found it to be more stable than it looks.

Although the tripod looked worryingly flimsy with our Nikon D300 with 18-200mm lens stuck on the top, the MagMount kept a firm grip on things, although we wouldn’t feel too confident if a gusty wind started up.

Walking the walk
To be honest, we felt such ‘nanas with the TrekPod in our hands we didn’t venture too far with it, but if you like large walking staffs you should feel comfortable with this.

However, we’d imagine things would get very messy at the business end if you used the staff in typical British hiking weather (i.e. wet and muddy), and although the bound tripod legs seem waterproof and reasonably sturdy, we’d prefer a ‘spikier’ end to a walking stick. 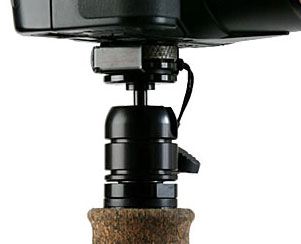 Conclusion
The TrekPod is a bit of a hard one for us to rate because we never really felt comfortable lugging the thing about, no matter how ‘good’ it was at its task.

If you’re after a Biblical-sized walking stick that can double up as a reasonably sturdy tripod/monopod, the TrekPod could be a useful investment, but we’d rather carry a proper, lightweight walking stick (of non-Goliath proportions) and a compact tripod for our outdoor photography.

You may think differently, so be sure to get a ‘hands on’ look at the TrekPod before buying. It didn’t do it for us, but you may just love it.