In the first instalment of our Wii Fit Review: A Month After Living With Wii Fit Ian gave an overview of what Wii Fit is all about. Today we’ve cover starting to use it and detail the aerobic exercises. 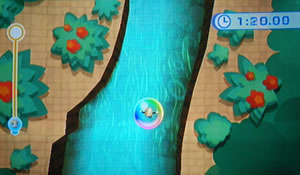 Getting started with Wii Fit
Once you’ve added your Mii (i.e. the little cartoon of yourself that’s used in most Wii games) to the Wii Fit Arena, the first step is to establish your baseline “Wii Fit Age”, where the Wii tells you to stand still for a few seconds so that it can measure your weight and centre of gravity. It also asks you to do some basic balance tests (such as leaning from one side to the other to move a circle into a square), and from all of this it calculates your Wii Fit Age.

This is supposed to be a guideline for how fit you really are, but it’s complete hogwash. In the past few weeks I’ve been 54, 34, 42, 48 and, most recently, 38. My actual age is 44, and this wild inconsistency is no help at all in establishing whether I am getting fitter. But still, it’s amusing when super-fit friends get a couple of years added to their real age by Wii Fit and then stomp off and refuse to touch the thing again.

The Activities
Having depressed or elated yourself with a ludicrous Wii Fit age, you can get on with the various activities. Broken down into four zones – Yoga Poses, Muscle Workouts, Aerobic Exercises, and Balance Games – you at first can only use a few activities, but as you complete each one then higher levels and entirely new activities are unlocked.

The Yoga and Muscle options are broadly similar, in that you’re guided by an on-screen fitness instructor and invited to copy their movements. Most of the activities involve standing, squatting or putting your hands down on the Balance Board, and perhaps holding the Wii Remote, so the Wii can measure how well you’re working in time to the exercises. Some of them abandon the Board and Remote and tell you to work on a yoga mat, in which case they take it on trust that you’re actually doing anything. These exercises vary wildly in difficulty, from fairly serene balance positions to quite arduous repetitive-fitness exercises. (In fact it was during my attempt to keep up with the damn instructor on the “Single Arm Stand” that I got my first Wii Fit injury, landing way too heavily and twisting my wrist, prompting callous feedback from the family about “visits to A & Wii”, “doing the tWiist” and “having a coronoWii”. Oh ha bloody ha.) 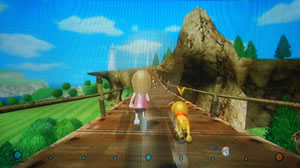 The two fitness instructors have the same weird inhumanity as everything else in the Nintendo universe: although perfectly able to demonstrate the exercises (thanks no doubt to sticking motion-control sensors onto real-life annoyingly fit übermensch), they both have ghostly white complexions and the sort of patronising, humourless, nobody-fails-on-my-watch attitude which is the reason most of us dough-waisted nerds hated our games teachers and avoid going to the gym in the first place.

While the Yoga and Muscle sections will only get used regularly by the kind of show-off who doesn’t actually need Wii Fit, the Aerobic and Balance sections are a lot more fun, and the kind of thing that makes Wii Fit a top-class pick-up-and-play family pastime.

2 thoughts on “Wii Fit Review: After A Month: Getting Started & The Aerobic Activities”