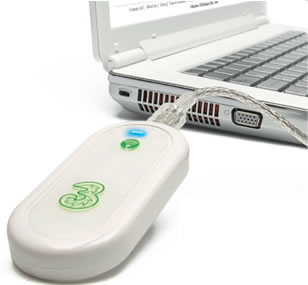 It appears that the success of mobile data has flourished since both the price of modem devices and the costs of using it have plummeted – quelle suprise.

3G network provider, Three, is reporting that there’s a seven fold increase in the amount of data that is being passed through their network since the introduction of the Skypephone.

More recently they’ve further encouraged people to sign up for the mobile data service through a deal with PC World, where a free laptop was given away when signing up for a £35/month data service.

Whooah, slow down!
It appears that all of this popularity has caused capacity problems for 3, with their network at times running at 102% capacity, ie jammed.

3 did a smart deal with T-Mobile back at the end of 2007 where the two companies would share their 3G network installations. While giving more places to get access to the network, it doesn’t necessarily imply that there would be any more capacity to provide Internet access.