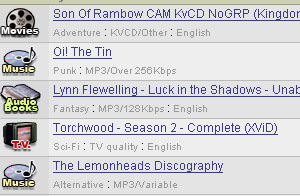 The naughty boys and girls at Demonoid have resurfaced online after being closed down late last year in a flurry of legal threats from the Canadian Recording Industry Association to the tracker’s server host.

This latest resurrection continues the cat and mouse battle between the BitTorrent trackers and The Man, with their attempts to block Canadian users failing to stop the site being taken down in November 2007.

The site’s BitTorrent tracker reappeared in Malaysia at the beginning of 2008 before vanishing for two months before resurfacing on a web server hosted by the Ukraine-based Colocall Ltd.

Web reports so far say that the site is now fully usable with all user accounts and upload ratios intact from last November.

A message on the home page of their website announced their return:

Since a few months ago, Deimos, the site administrator, lacks the necessary time to take care of the website, because of personal matters he’s been needing to attend to. For this reason, he has decided to leave the site staff.

Before leaving, he assigned a new site administrator from among his friends to take care of the site. The old moderator team will continue helping with the site, unchanged. We will try to keep running everything just as it always has been.

The trackers and website seem to be working properly, and should any issues arise, they will be taken care of as soon as possible. The site might be going on and offline over the next days as we work out any problems.

Welcome back, and enjoy your stay!

The previous Serbian administrator Deimos seems to have been replaced by a new admin called Umlauf, and it remains to be seen how the Ukranian government will react to the inevitable legal requests for BitTorrent copyright enforcement.

At the time of its closedown, Demonoid had reigned as the second largest and second most used public tracker for over a year, with an had an estimated 3 million peers.