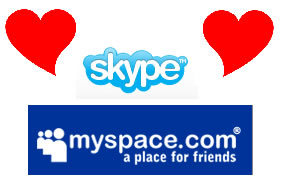 MySpace is to introduce MySpace IM with Skype, giving their considerable number of users the ability to directly IM with each other, and talk using Skype for zero cost.

The integration between MySpace and Skype sounds like it’s been considerable, with MySpace users able to block or grant access to them through settings on their MySpace pages, including only accepting calls from MySpace ‘friends.’ In addition MySpace profiles, photos or avatars can also be linked to their accounts on Skype.

The service is going to 20 countries first, where MySpace is localised. Strangely Japan, China and Taiwan have been excluded.

Who Gains The Most
Financial terms of the deal were not disclosed, so as yet, it’s not clear who the money flowed from and to, or indeed if money came into it.

Many feel that MySpace has been losing its touch, especially after it was overtaken by FaceBook in popularity. Perhaps a deal like this, offering MySpace users a reason to stay with MySpace will stop the rot.

The last services big deal for them was between Google and MySpace, with Google paying them considerable amounts of money.

Skype gains with the potential of expending their general subscribers base, and the more people they have running their software, the stronger their communications network is, as every machine running the software can pass communications traffic onwards.