With all of these moves towards digital delivery in entertainment, we thought it would be worthwhile understanding one of the key items in this process – how to get the digital content to UK households.

Steve Kennedy is an acknowledged expert in the telecoms and data networks field, so it was an obvious choice for us to ask him to write an overview of how other IP operators can compete with BT – by creating their own data network. To do this, they need to put their own equipment into the telephone exchanges that connect to peoples houses. That process is Local Loop Unbundling (LLU).

Over three parts, we’ll give you a full background in LLU in the UK.

The two previous pieces gave an overview of LLU and which companies are players in the UK; and LLU Penetration in the UK and the (un)Economics of it. 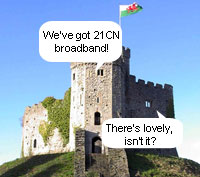 Also a single network would have meant it could go to many more of the 5,600 DLEs than the 1,200 everyone’s competing for at the moment.

Unfortunately competition is so fierce between the telecoms operators it will never happen – much to their joint detriment.

Broadband Competition
BT is still the biggest player by far and they’ll try and increase market share when they launch their 21CN. Many operators are underestimating the effect of BT’s 21CN and how quickly BT can launch it.

When they do launch, they are trying to get back to a situation whereby everyone else once again becomes a BT reseller.

Virgin Media have around 4m customers, but they have little money for expansion and are likely to use LLU in future to provide broadband services. They’re stance is even worse now Sky have pulled their basic channels, which is likely to cause customers to migrate to Sky and if enough go, then Virgin Media may be in a sticky situation (the city won’t look kindly on a reduced customer base).

Wireless is the next big hope
Unfortunately there’s very little spectrum available for wireless broadband in the UK, though 2.5GHz is going to be made available for auction later this year, but it wont be cheap. It was reserved for 3G use, so there may be bids from 3G operators but it’s also bang in the middle of the frequencies WiMAX can use (BT have already said they’re interested in bidding for it).

Other companies who do have spectrum are: –

* PCCW (UK Broadband) who have a national 3.4GHz license.

It’s not clear whether the recent Pipex sale announcement covers the wireless side or not.

Future
Content will be key, access will just be a delivery channel for content and broadband will just be a commodity item (making it even more uneconomic to roll-out).

BT will also dominate when they roll-out their 21CN, they want to be the Sky of fixed networks i.e. use them to deliver the content and they take a big chunk for the customer charge for doing so).

The future’s bright – but only for BT.