The practicality of using cellular data service while you’re abroad hasn’t been high, unless your company doesn’t mind paying the crazy rates that has been data-roaming. 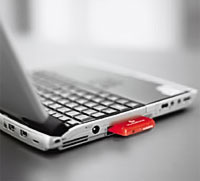 Sanity appears to have been reached by Vodafone, as they announce a flat-rate of €12/day for data in Europe – but only if accessed from “mobile-enable laptops” from 1 July 2007. It will replace their current per Megabyte service, giving what they say is “practically unlimited data usage,” which is actually up to 50Mb/day.

We asked Vodafone for clarification as to what “mobile-enable laptops” were and they said the service would be open to any laptop user who has a datacard, or a mobile phone with modem – as long as they opted-in to the service. The opt-in is free of charge.

Back in June 2005, Vodafone offered a months worth of data roaming for €75, but only included 100Mb in the service – the equivalent of two days data limit for the new service.

Vodafone have been running a voice equivalent roaming service, Vodafone Passport, for two years now, which they claim has 12m users. They tell us that they’ve yet to come up with a swish name for the equivalent data service.

The EU has been on at mobile phone companies to make their European voice roaming charges more reasonable for a while – in fact Vodafone pre-empted any action by the EU, by announcing a dropping their prices a year before they were going to do it.