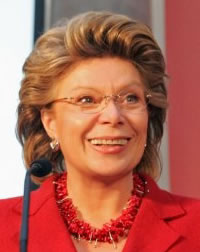 She’s got a mission to eliminate mobile phone roaming rip-off charges. She’s Commissioner Viviane Redding of the EC, and today, Vodafone took PR action to keep itself out of her sights, by promising to “cut roaming by 40%” by this time next year.

Vodafone’s announcement says: “Average European roaming costs for Vodafone customers will be cut by at least 40% by April 2007, when compared to last summer.”

This, it says, “will benefit over 30 million Vodafone customers who roam every year, and will see the average cost of roaming in Europe fall from over €0.90 to less than €0.55 per minute.”

Ironically, Vodafone is probably not highest on Commissioner Redding’s hit list. It’s certainly possible to pay over the odds for Voda phone calls when overseas – pick the wrong contract! – but amongst the giants, Voda actually scores quite well on fair use, especially if you’re a Passport subscriber.

Arun Sarin, Chief Executive, Vodafone, said: “Customers want simplicity and value for money when they’re travelling abroad. They get it with Vodafone Passport, which we launched last year, allowing customers to take their home tariff abroad with a small additional per call fee. Today Passport provides savings of at least 30% for more than 6 million Vodafone customers.”

But like many of the giants, Vodafone is suffering from the cost of providing phones. All the European operators, traditionally, subsidise handsets; they give them away, or sell them for a fraction of their cost, in the expectation of making substantially more out of phone call charges – and it works.

Unfortunately, we’re changing our phones too often. It’s mostly the shops that do this, because they are incentivised to do it by the networks.

The networks all pay a premium to a phone shop who “steals” a customer from a rival network. At the same time, paradoxically, they’re trying to make contracts longer: 12 months minimum, 18 months or even longer, as standard.

So the trend is to pay as you go phones – which tend to be paid for. And it’s PAYG agreements which most heavily penalise you when roaming. That is, assuming that your PAYG phone even makes it possible to use it overseas; many don’t.

Sarin said: “The success of Passport shows the demand for simple, great value roaming in Europe and today we’re showing that Vodafone will continue to lead the industry in providing it.”

What he probably means, is that Passport needs to be able to compete with PAYG, and Vodafone sees no harm in ingratiating itself with the Commissioner for Information Society and Media while doing so.