As if the life of the portable music player listener isn’t hard enough to survive already, MediaReady has brought out a new range to attract the eye of street magpies – the Bling Player.

As you might guess from the name, the Bling Player has rather a lot of bling-esque stuff stuck to it. The young dudes and dudesses at Digital-Lifestyles tell me that this is referred to as being “iced out,’ or at least it used to be – street phrases move fast. 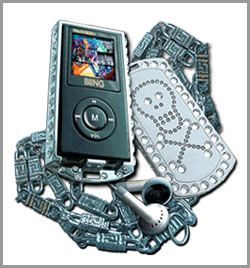 The Bling Player is a 2Gb Flash player with FM radio built into it, capable of storing 30+ hours of music or 16+ plus hours of video. We hear that it “will ship to leading consumer electronics, clothing, and jewellry retailers,” starting April 2007.

The price of $199 will possibly mean that prospective purchasers will need to sell a bit of their current bling to own it.