Following on from yesterday’s introduction to the multi-player version of GRAW 2, today, we’ll dig a bit further into the detail.

Spawn Camping tackled
Players of multi-player will be very glad to hear that it has an updated version of spawning. In previous games, after death, players were brought back at set spawning points, which lead some naughty-types to sit at these points, just shooting people before they had a chance to escape. These rotters will be frustrated to hear that they’ll no longer be able to do this. 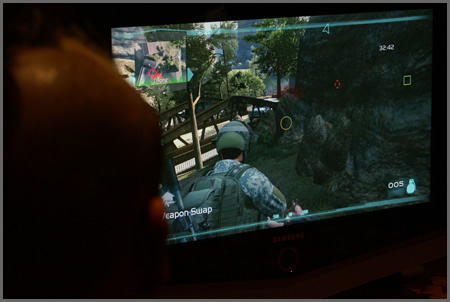 Spawning is now to a region rather than a set point. The spawn algorithm looks at the number of people who have previously been killed there, numbers of enemy soldiers present, etc. On spawning, the player is invulnerable, but able to fire. As soon as they fire a shot, they lose their invulnerability.

Customisation and clans
Building and managing a clan – of up to 100 people – is now built in thanks to Ubisoft’s tool that has been incorporated.

There’s lots of customisation of your player possible with a tremendous selection of clothing and headgear. Ubisoft tells us that lots of clans that have been on the beta have created a ‘uniform’ that all members must wear. Some may be sad to hear that there’s no face-mapping, but it had to go because of the customisation.

One new feature that should provide an extra dimension to multi-player games is the addition of the medic function, giving you the ability to get players back to full health when they’ve been hit with a round that has incapacitated them.

Maps
The developers have spent a lot of time on the multi-player maps, improving not only the quality, but also the details. In their words, they’ve “tried to create spaces that aren’t just normal.”

Examples of this are jungles that aren’t just jungles, but ones that have had a C130 aircraft recently crashed within it, still smoking and a village that has just been ravaged by a Tsunami.

Shhhh, listen to the audio
If you want to get that edge on your opponents, you’re going to have to listen hard, as sound has been brought further in to successful playing of the game. By turning your HiFi and ears up, you’ll be able to track other players simply by listening to their where their foot steps or gun shots are coming from. 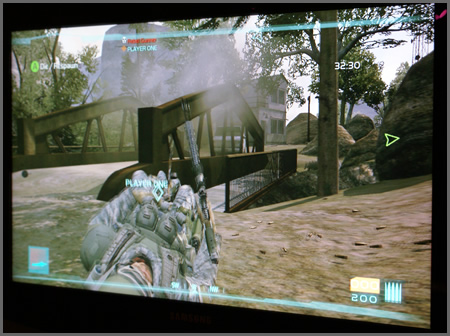 To build your adrenaline, the music in the multi-player game changes as things get more difficult.

__Conclusion
The hour or so I had with it, doesn’t give you the opportunity to really get your teeth into a game like this. The real delight of it will be exposed after many hours of button and trigger jiggling, playing via xBox Live.

What I can tell you, is it looks very special with the realistic lighting heightening an already impressive experience.

They’re going to have to do something pretty disastrous between now and the launch to muck this up. To me, this has all of the makings of a hit game.

Buy it on Amazon UK or Amazon US

Have a listen to our exclusive audio interview with Christian Allen, Creative Director of Red Storm.