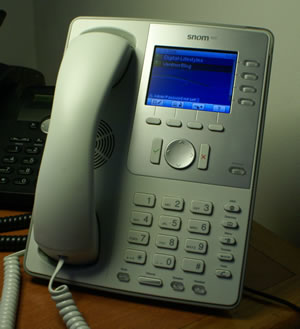 We’ve got hold of the new top of the line handset from snom – the snom 820 – and are the first to review it.

It’s the flagship – and currently only member of – the new snom 8 Series range and radically redesigned from their 3xx series.

The look is striking, making it stand out as a executive tool, ready for some serious ‘power dialling’.

Video is at the bottom of the post – jump

We’re going to do this review as a two part-er. This initial one being our first impressions and setting it up to use with a VoIP service, the second following sometime later after we’ve lived with the phone.

First impressions
An elegant bent aluminum bar allows the snom 820 to be in two positions; 33 degrees that they describe as vertical and 55 degrees – horizontal.

There’s no two ways about it, the 820 demands attention especially when standing up. The 320 x 240 pixels colour screen radiating at the top of the unit, offering the available phone lines, or ‘identities, that have been configured.

The handset is light, but with a feeling of quality which is matched by the quality of the call.

Once we’d loaded the dialling directory, scrolling through the entries was easy, but a little slower than the LCD display on the snom 300 that we’d used previously.

Configuration challenge
As the snom 820 has a built-in Web server, as the 3xx range does to, configuration is via a browser, although it is possible to configure many of the setting directly on the phone, if you’re a glutton for punishment.

Setting up VoIP handsets is a dark art, with a _huge_ number of configurable options on the phone.

The casual consumer has no chance, and those with some technical knowledge will also be scratching their heads for quite a while if attempting to set it up themselves.

For many people this won’t be an issue as their VoIP handset will be supplied by their VoIP provider, in which case they’ll come pre-configured.

Luckily for us, Digital-Lifestyles’ VoIP provider, VoIPFone, has an auto-configure function on their site that configured the 820 in the blink of an eye. A major relief.

Other bits and pieces of configuration were sorted out by VoIP expert Sean at VoIPFone, who frankly was a god send, proving that the selection of your VoIP provider is as much to do with the quality of their support, as the price saving they can bring.

If you subscribe to our YouTube channel, you’ll get alerted when the next section of the review is published.