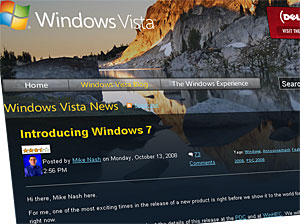 The replacement for Vista is going to stick with the codename it acquired during the development process, and here’s Microsoft general manager Mike Nash to fluff it all up: “Simply put, this is the seventh release of Windows, so therefore “Windows 7″ just makes sense.”

Happily Nash was on hand to to explain all in the Vista Team Blog, saying that Microsoft chose not to ‘date’ the release because a new version is not shipped every year. 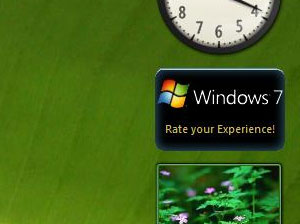 “Likewise, coming up with an all-new ‘aspirational’ name does not do justice to what we are trying to achieve, which is to stay firmly rooted in our aspirations for Windows Vista, while evolving and refining the substantial investments in platform technology in Windows Vista into the next generation of Windows,” he continued. In a very long sentence.

Although Vista sold shedloads of copies, it failed to match the excitement of Apple’s OS X and several versions of Linux, with many consumers making it obvious that they’d rather stay with trusty ol’XP than upgrade to the glossy feast of eye candy that is Vista.

The increased system demands of Vistas has also seen XP gaining huge traction in the netbook market, where performance is more important than shiny shiny baubles.

Windows 7 is expected to ahead of the original schedule, sometime at the very end of 2009 or early 2010.