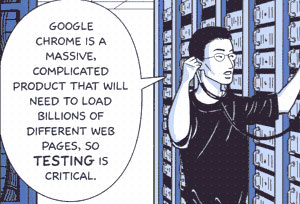 In a fascinating development, search engine kings Google have released a new browser to take on Firefox and Internet Explorer.

Described by Google as a browser to “drive innovation on the Web,” Chrome offers a more powerful JavaScript engine called V8, and “improved speed and responsiveness across the board.”

Cunningly, with Chrome, each open tab represents an independent browser environment, so that if one page crashes it can be safely closed down without dragging the whole browser down with it. We love this idea because we’ve often got a ton of tabs open at any given time.

The browser, released as an open-source initiative, and incorporates components from Apple’s WebKit and Mozilla’s Firefox, and Google plans to make all of Chrome software code open to other developers to tweak, enhance and expand. 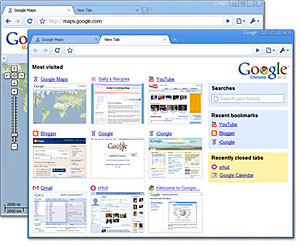 There’s also a special privacy mode that lets users create an “incognito” window where “nothing that occurs in that window is ever logged on your computer.”

In a creative masterstroke, the new browser’s features were explained via a 38 page comic strip drawn by one of our favourite cartoonists, Scott McCloud.

The beta of Chrome is available – we’ve had a quick look and are pretty impressed with it so far.