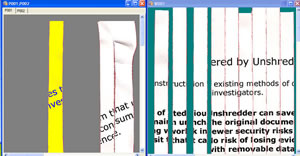 Back in the day, you needed a team of dedicated followers to re-assemble a shredded document, as the Iranians did when the US left their embassy in Tehran in the late 1970s.

These days there’s a darn bit of software to help you do it.

Unsurprisingly it’s called Unshredder and they label it the “first commercial document reconstruction tool in the world!”

They claim it can handle strip-shred, cross-shred and torn pages and describe it as a “a menu driven Windows application that automates the reassembly of shredded or torn documents.”

It’s pretty manual process
We downloaded the demo version and had a quick go of it to see how it work.

Much to our surprise, it appears a pretty manual process, despite being on a computer and claims of it automating the reassembly.

Once the strips are scanned, in you’re able to shift them around on the screen, moving them between your work and the documents areas.

If strips are at the wrong angle, you’re able to use the software to rotate them to match up.

Once your happy with a collection of strips, you can group them together and move them as a block.

Don’t get us wrong, it’s actually pretty good fun to use, making what could be a pretty boring process into a bit of a game. Like a big puzzle. 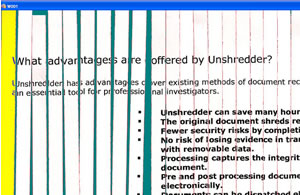 We’d imagined that the software would have the intelligence to work out what fitted next to what.

It’s on the ‘reconstruction’ module that we used — that was all that was avaialble on the demo — but frankly we could see much difference between doing it on the computer and doing it on paper.

Paying for it
Rather than sell you the software, Unshredder is licensed to its customers on a month basis. A great way to maximise returns.

Alongside the monthly rental, you are also recommended to buy the special paper trays from them which cost $1 each – good for a single use. Mind you, they very generously provide free shipping for these!

Score
This score is based on the demo version that we down loaded and the score is heavily influenced by its apparent lack of automation of joining the bits together again.

The software itself functions well enough, but we kept coming back to the central question – what’s the point of it? Surely doing it on pieces of paper would be a very similar process?

The only advantage that we cold think of it, was that it didn’t matter if you were working by a window on a windy day, which must be about the biggest nightmare when doing it with paper.

Perhaps we just don’t get the complicated world of espionage and counter-espionage.