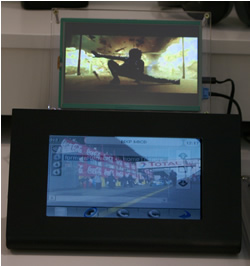 In a world where increasingly people have to watch a flickering screen to be entertained, it’s not surprising that screen in cars has been a big success.

For parents it’s a great way to keep their children quite while they travel to their destination. Heaven forbid that they talk to each other.

That aside, Digital-Lifestyles is all about the development in areas, even if we don’t necessarily use it ourselves, so we want to learn.

If the kids are watching something in the back of the vehicle, what the heck do the people in the front do? Well one of them is driving (hopefully) … but the other?

Well NXP, wizards in all things chips got to that idea well before we did and have built something to help.

At last years IFA in Berlin they showed us a very nifty solutions – a screen to be placed in the centre console in the front of the car that allowed video to be watched.

The difficulty of this is that the driver can’t want the screen, one because it’s distracting, but secondarily, in some countries it’s illegal.

The clever sticks at NXP have come up with a screen that can be viewed from two different sides. In the demo unit we saw, form the right it show a separate video stream from that in the back, but from the left it show the Sat Nav or car computer.

It’s a very neat solution that circumvents all of the drive issues.

Have a view of the video and see what you thing …