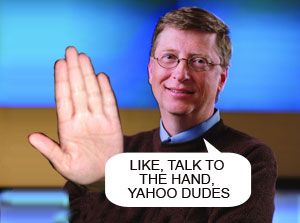 Shares in Internet old skoolsters Yahoo crashed by fifteen per cent on the weekend after Microsoft walked away from protracted takeover negotiations.

Microsoft had been waving a fearsomely hefty £24bn wad in Yahoo’s face since January, but gave out a firm “talk to the hand” instruction after their takeover deal failed to be accepted.

Wall Street was quick to offer its opinion, with shares dropping to around $24, swiftly erasing around $6.5 billion off yahoo’s market value.

The word in the city is that Yahoo were stone cold bonkers to turn down Microsoft, with Avian Securities analyst Matt Bryson commenting, “We think Microsoft’s bid was very generous and Yahoo should have taken the deal, because Google is out-innovating them and continues to take share. That’s unlikely to change under Yahoo’s current strategy.” 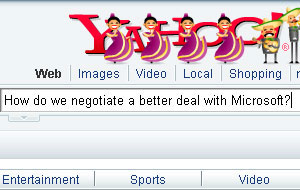 Roland Hirschmueller, an Baader equities trader thinks that Yahoos CEO, Jerry] Yang, could soon be given the Order Of The Royal Boot saying that he was “certainly under a lot of pressure now. His days are numbered, if he doesn’t manage to come with an alternative strategy.”

Standard & Poor’s equity analyst Scott Kessler painted an even bleaker picture, saying that he expected to see a lot of shareholders “just throwing in the towel.”