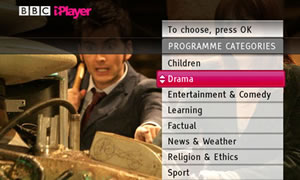 As expected, BBC iPlayer is now available on Virgin media at the press of the Red Button on the remote to view on their TVs, rather than having to drag their PC in front of them.

Virgin Media’s 3.5 million customers will now have access to the seven-day catch-up service. This will be followed later in the year with around 350 hours of BBC programming a week being integrated into the Virgin Media EPG.

Both Virgin Media and the BBC back-slapped each other in an almost embarrassing way with Malcolm Wall, CEO of Content at Virgin Media, saying, “We’re delighted to be the first TV platform in the UK to offer our customers BBC iPlayer as part of our on-demand service.”

No bandwidth disputes
One advantage of using the Virgin Media network to distribute iPlayer is that there will be none of the arguments over who’s paying for the bandwidth as the BBC is experiencing with many of the ISPs in the UK.

The Other Red Button
When they see the selection of programmes available on the BBC, users of the service may well be reaching for the other red button … the Off button.

One thought on “iPlayer Now On Virgin Media TVs”