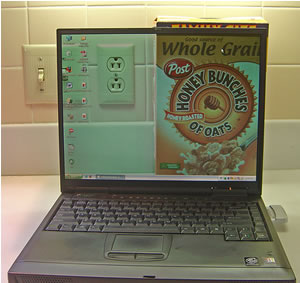 We’re still reeling after reading this story last week that a federal appeals court in the US ruled that it was fine for US customs agents to go through the content of an airline passengers laptop with no evidence of wrong doing – just because they felt like it.

The Ninth U.S. Circuit Court of Appeals in San Francisco said after consideration of

We must decide whether customs officers at Los Angeles International Airport may examine the electronic contents of a passenger’s laptop computer without reasonable suspicion.

… their view was that a computer is no different from a suitcase, or any other piece of property subject to search at an international border.

The defendants lawyer, Marilyn Bednarski, said she was planning to ask the full appeals court for a new hearing.

Commenting on it, she said as computers are “an extension of ourselves. It really is like looking into someone’s mind, rather than looking into a box or a folder or a purse.”

OK, from reports it appears that the client in the case, Michael Timothy Arnold, may have had child pornography on his laptop when travelling from the Philippines – so because of that, it makes it a lot harder to stomach.

Laptops are private
The important thing is that the contents of someone’s laptop is private and shouldn’t be entered without a good cause for suspicion.

Reading the case notes, it’s clear that what kicked this whole thing off was, after being chosen at random and asked to fire up his laptop. When opening a folder called “Kodak Pictures,” they found two picture of nude women – which was enough to call in the United States Department of Homeland Security, Immigration and Customs Enforcement (“ICE”).

Recent travel restrictions are bad enough, seriously damaging the enjoyment in travelling, but this is just crazy. So much for globalisation!

How long will it be before custom agents are allowed to take copies on your hard drive when travelling, as “it will save time.” Checking the drives contents at their leisure. Sounds mad, but so did the idea of your laptop being open season, last week.

One thought on “Your Laptop Is Open Season When Flying To SF, USA”