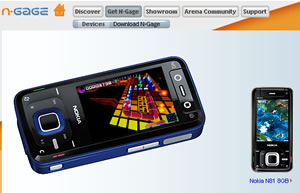 As you may well remember, Nokia brought out the N-Gage games/phone back before 2003, following it up with the N-Gage 1.5, then the second generation N-Gage QD (June 2004). None of them really set the world alight.

After buying Sega’s mobile gaming unit (2003), they finally got around to launching the service that let N-Gage owners buy games online in 2006.

The Evolution of Chips
Fast forward to today, when those who are registered with Nokia’s N-Gage Website receive an email letting them know that they can have N-Gage functionality on a selection of their ‘normal’ Nokia phones.

A clearer demonstration of the continual march of the power of mobile phone chips could not be had. Five years back it needed a dedicated handset to be a games machines. Today, it’s a bit of software that you can load into your phone to run as an application that will provide the same function. 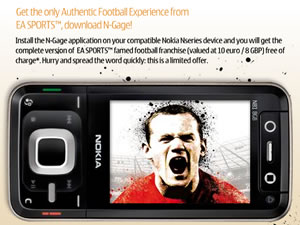 FIFA08 for free
By way of a bribe encouragement to download the N-Gage player to your phone, Nokia are giving away 20,000 copies of the FIFA08 to run on it. It normally costs 10 Euro/ £8.