Support Digital-Lifestyles.info by buying your Nokia QD from Amazon

We’re doing a three part review: part one covers the deck itself, part two covers available games and part three will cover the new titles specially produced for the launch of the QD.

Nokia knows that the N-Gage will succeed or die on the the quality of the games and Arena service, and the two forthcoming sections of the review will give you an insight as to whether they’re any good or not – watch this space. In the meanwhile, we’ve had a close look at the new QD hardware.

Part One: The N-Gage QD deck itself

Nokia have admitted that their first attempt at a games console didn’t exactly set the world on fire: it had a number of design problems and they misjudged market desires – and failed to take into account just why Nintendo have had a 15 year reign on mobile gaming. But with new features, a greater emphasis on networked play and the GameBoy Advance looking a little basic these days, have they got it right this time?

The first thing that pops into your head when you handle the new Nokia N-Gage QD is “Isn’t it small?” And it is – surprisingly small. Here’s a phone and a games console, and it’s considerably smaller, and lighter, than a GameBoy Advance. Cheaper, too, if you get the QD on a decent contract.

The deck is well constructed, and despite its compactness it has a reassuring weight to it (143g), without being awkward. It’s one of the most robustly-made phones I’ve used. The equator of the unit is a protruding rubber seal, and will generally be the first thing to hit the floor when you drop it, thus providing a fair bit of impact shock protection. The seal clips neatly over the phone’s ports limiting sand and water penetration, but doesn’t make it waterproof. External connections are limited to just headphones, power, and the game slot. All communications with the N-Gage are done via Bluetooth. The rubber equator also features no less than two loops for connecting a lanyard to – a quick look at any bus stop will demonstrate that youths like nothing more at the moment than hanging things like keys and phones round their neck with a lanyard. Or they do in Blackheath anyway.

Using the unit as a phone has been vastly improved – you now hold the unit flush to your cheek, rather than holding it out at an angle, as was the case with its previous incarnation. Sadly, the unit’s display rests against your face when you make a call. If you wear make up or use the phone on a warm day, be sure to carry a cloth so you can wipe sweat and foundation off the screen. Lack of exterior controls for volume mean you can’t easily adjust call loudness if you’re suddenly in a noisy or quite environment.

Buttons have a nice clicky feel, and are well illuminated. 5 and 7, usually the confirm and cancel keys for games are transparent with raised tops so that you can find them more easily. The directional pad is in a far more sensible place, but has a bit of a floaty feel to it. The unit would benefit from shoulder buttons to save fingers traversing round the face of the deck so much, but that might just be my GameBoy usage creeping to the fore there.

The 4096-colour display is difficult to read if the backlight isn’t on, but battery life in the QD is impressive. Nokia claim a full ten hours of gaming off a charge, up from about three to six hours previously. I charged the phone on Tuesday morning and only needed to give it a drink again on Thursday, after leaving it on continuously with my normal number of phone calls, texts and a few bouts of The Sims. As a side note, it accepts the standard Nokia charger and I can’t think of a household that hasn’t got four of those kicking around somewhere.

The display can be a little hard on the eyes in bright sunlight, too – a side by side test with the 32,000 colour GameBoy Advance SP on a sunny day on the Heath showed that the SP had far better contrast.I have to ask: with many smart phones, the GBA, Sony’s PSP and the Ninendo DS all featuring screens capable of displaying 32,000 colours and above, will the N-Gage have the graphical flair to entice users?

The phone boots into a rather plain user interface, with the standard contacts, calendar, telephone, messaging and web functions available straight away from the Series 60 operating system. A single button press will launch whatever game you have in the game slot. You can leap straight into N-Gage Arena from the phone menu, without having to go into a game – Nokia are betting a lot on the Arena being a key selling point for the phone, and I’ll cover that in another review covering the news games. 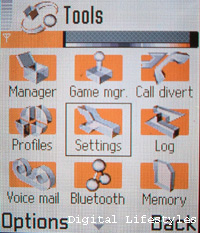 The interfaces for the phone and the game functions were evidently designed by two different teams. Two different teams in different countries. Who never spoke to each other or exchanged emails, or perhaps were even completely unaware of each others’ existence. The N-Gage Arena and gaming interfaces are much more compelling and excitingly designed, showing that Nokia have put a lot of thought into their appearance.

The general phone interface is quick and responsive, and I’ve never felt as if I was waiting for an application to do something, which is refreshing given the performance of some smart phones lately. 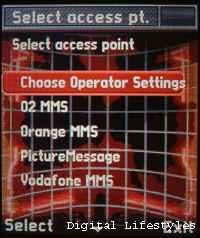 All the usual messaging functions are present: SMS, Multimedia Messaging, and email. I did come across an irritating feature whilst texting, however: pressing the uppercase key a couple of times whilst writing a text message (for the odd bit of EMPHASIS) turns the T9 dictionary off for some reason. This is highly annoying and requires six or seven button presses to switch it back on and then another six or so to get back to where you were. I do hope this is a bug rather than a deliberate feature.

Contacts, calendar and other aspects of the phone can all be managed easily from from the software suit supplied with the phone, using Bluetooth as stated before.

Web, WAP and Arena are all accessed through a GPRS connection, so ring your service provider for your settings. The unit features a sound recording application which, whilst handy, uses very high compression and sounds rather watery.

Games are supplied on a MMC card, and the QD is backwardly compatible with its predecessor. The moving of the game slot to the bottom of the console is a welcome move, so you don’t have to take the back off the unit to swap games over. Nokia seem to have realised that people might want to play more than one game in a session.

Despite not having a camera, the QD will play video clips and other multimedia messaging, however there’s no radio and something key has been removed from this iteration of the N-Gage.

Nokia have removed the dedicated MP3 player from the console, preferring instead to emphasise that the QD is optimised for gaming. This makes the deck less useful in my opinion – and it leaves us with mono sound for games! Midi music and samples in Sims Bustin’ Out is unconvincing and muddy – sound for the rest of the games will feature in their review, coming soon.

We’ve only seen one game at the moment, so we’re not going to come to any conclusions about Arena, sound or graphics capabilities until we’ve seen exactly what the games can make the N-Gage do. Nokia say that it’s the games and the Arena that are going to make the N-Gage a leader, and since it’s a somewhat average phone, we’re going to have an in-depth look at Nokia’s key selling points in the next part of this review.

Support Digital-Lifestyles.info by buying your Nokia QD from Amazon