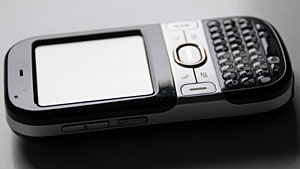 Yesterday, we took our first shufti at Palm’s new smartphone. Here we get a feel for the diminutive handset.

Around the phone
Looking around the rest of the phone, there’s the trademark convenient silent mode switch at the top, while the left side contains volume up/down buttons and a customisable function key.

On the opposite side is an IR window and memory card door (which can only be accessed if you take the back off) with the camera and speakerphone on the rear.

Wrapping up our mosey around the Centro, there’s a 2.5mm headset jack lurking on the base along with a proprietary multi-connector, power port, mic inlet and handy lanyard loop.

Using the phone
If you’ve never tried the Palm OS before, we strongly suggest you give it a go because you may be surprised. It’s very fast, responsive, devilishly easy to use and comes with a program library of thousands of useful shareware/freeware apps. 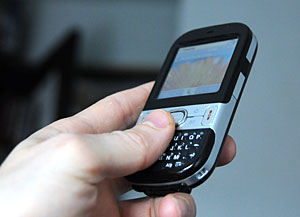 The Centro’s 5-way controller, large onscreen buttons and one key launching makes the phone a breeze to navigate, and unlike some phones we’ve used, we very rarely had to dig out the stylus to get around (good job too, considering the supplied stylus is a shockingly flimsy affair – we recommend shelling out a few quid for the rather more stylish and robust combined stylus/pen metal Centro styli available on eBay.)

Once we fiddled about with the plasticky back and slipped in the SIM card we were up and running in seconds, with no problems connecting to the phone network or getting on the Internet.

The high gloss finish makes the phone a bit of a slippery fella to hold, so if you’re the sort that likes to conduct business calls in the Little Boy/Girl’s room, it might be worth investing in a lanyard (see: Mobile Users Drop £342m Of Phones Down The Pan).

In the next part of our review we take calls and look at the camera.