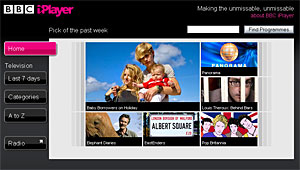 The BBC is reporting that their iPlayer is overflowing with win (as da yoot would say), with over 1m users streaming or downloading around 3.5m BBC programmes since the Christmas Day launch.

The on-demand Internet TV service notched up over a million users between Tuesday 25th December and Monday 7th January, downloading or streaming 250,000 programmes each day on average during this period.

The BBC said that most users preferred to stream the content rather than download it, with average users sat in front of their screens for for just under 25 minutes.

Here’s the top 10 listing of iPlayer streams, with the original transmission date shown in brackets.

“Typically, people who use the BBC iPlayer are spending nearly half an hour a day watching streams of their favourite programmes, suggesting that it looks set to revolutionise the way BBC TV programmes are viewed in the UK,” commented Ashley Highfield, director of BBC Future Media and Technology.

“Significantly, while the BBC iPlayer allows the public to catch up on their favourite mainstream BBC shows, it’s also encouraging to see that nearly half of all programmes streamed or downloaded are placed outside the top 50, demonstrating how on-demand services can bring niche programming to a wider audience,” he added.