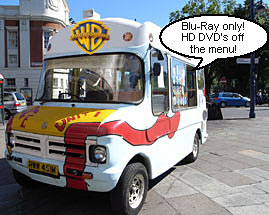 Hollywood studio big boys Warner Bros have dealt Toshiba and the HD DVD gang a mighty kick in the lasers by declaring that their high-definition DVD titles will soon be released exclusively in the rival Blu-ray disc format.

Warners Bros’ big chief Barry Meyer explained that giving HD DVD the order of the boot was a “strategic decision focused on the long term and the most direct way to give consumers what they want.”

“The window of opportunity for high-definition DVD could be missed if format confusion continues to linger. We believe that exclusively distributing in Blu-ray will further the potential for mass market success and ultimately benefit retailers, producers, and most importantly, consumers,” he added, over the distant wail of distraught HD DVD supporters.

Jeff Bewkes, president and chief executive of parent group Time Warner, said that the company had hoped that by releasing films in both formats, punters would benefit from choice, with sales driving mainstream adoption of high-definition content, and driving hardware prices down. 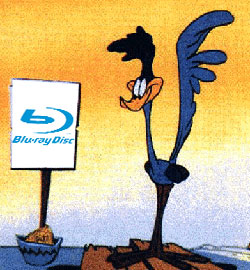 Instead, the two-format approach led to bafflement and indifference among consumers, resulting in high-definition disc sales failing to become “the important revenue stream that it can be for the industry.”

With Warner Bros now slapping backs and exclusively drinking in the bar with the Blu Ray boys, pundits are predicting a rocky future ahead for HD DVD format.

“With Warner neutral, both camps had a reason to sustain the battle throughout 2008,” commented Michael Greeson, president and top dog analyst for the Diffusion Group.

“With Warner going Blu-ray only, HD DVD’s lifetime is now numbered in days, weeks at the most. Blu-ray will spin this announcement in such a way that consumers will have a very hard time rationalizing a HD DVD purchase”, he added.