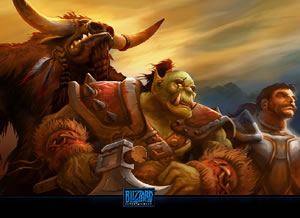 Big moves in the video game industry arose yesterday, as media giant Vivendi announced plans to take a controlling stake in Activision. They plan to call it Activision Blizzard.

The real strength to Vivendi’s hand is having Blizzard Entertainment in their small portfolio of game companies.

Blizzard’s major title is the online gaming phenomenon World of Warcraft, which as of June 2007 had over nine million players worldwide – each playing a monthly subscription to take part.

Background on Activision
Activision have been around forever in video games terms – all the way back to 1979, when they started bringing out games for the Atari 2600 console.

Their strength in writing games for consoles has continued with classic titles like the Call of Duty series and More recently Guitar Hero.

The Numbers
As with the business things – the big excitement for bean-counters and swaggering bosses is that this combined beauty is a B I G boy.

The claim is that it will be ‘World’s Largest, Most Profitable Pure-Play Video Game Publisher.’ Having a combined value of $18.9 Billion is a pretty good start down that road.

Activision Blizzard is expected to have approximately $3.8 billion in pro forma combined calendar 2007 revenues and the highest operating margins of any major third-party video game publisher.

The Effect
Online games are not only the future because of the huge upside of playing games with other humans around the world – rather than a game with restricted AI – but for the companies that operate them, they’re very exciting because they generate revenues well beyond the price of shipping the box off the shelf, due to their monthly subscriptions.

Activision Blizzard is an attempt to take on the gaming powerhouse that is Electronic Arts. Deals like this normally have a knock on effect, unsettling other companies into action. Expect more deals.