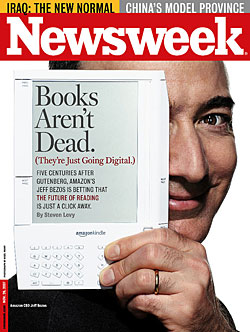 We first caught wind of Amazon’s ‘Kindle’ wireless electronic book reader back in September, but at the time we weren’t sure if we were dealing with wild speculation, vapourware or the real McCoy.

Well, we guess confirmation doesn’t come any clearer than the front cover of Newsweek Magazine, which features the Amazon CEO proudly showing off the new reader with the caption, “Five centuries after Gutenberg, Amazon’s Jeff Bezos is betting that the future of reading is just a click away.”

In the interview, Bezos outlines the feature set, with the reader touting an upmarket $399 price tag, a 6-inch E-ink screen and EV-DO “Whispernet” on Sprint for buying books over the air.

Bezos describes the company’s vision for digital books replacing “the last bastion of analogue,” with users able to buy books for a rather pricey $9.99, and subscribe to newspapers and “select blogs” for additional monthly fees. 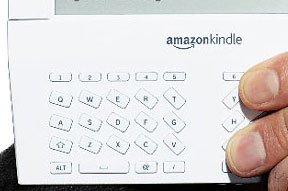 The white-coloured reader has large ‘Prev Page’ and ‘Next Page,’ buttons on the edges with a fiddly looking QWERTY keyboard below.

There’s no built in backlight, which makes the quoted 30 hours of battery life a little disappointing, although the full recharge time of two hours sweetens the pill a tad (but imagine the stress of being away from power point and seeing the battery life running out just as you’re coming to the end of a riveting read!).

We were extremely skeptical of e-Books until we tried out the Sony Reader a while ago and were blown away by the quality of the onscreen text – it really was as clear and as crisp as reading the printed word.

We still think the price is too high though, but we imagine that it’s only a matter of time until costs start tumbling downwards in the same fashion as MP3 players.

Talking of which, if Amazon could add an MP3 player to the package as well as a web browser and some PDA features, we’d definitely be a bit more interested in carrying one of these around (oh hang on – have we just described the ill fated Palm Foleo?!).