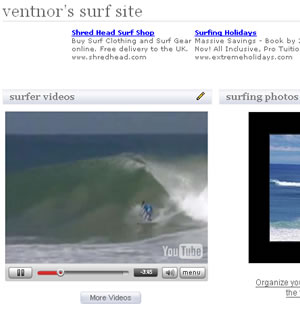 Back in the early days of the Web, newbies often used to refer to Web browsing as Surfing The Web, well there’s a new service that’s just launched that aims to help real Surfers on the Web.

Given how strong the bond between surfers is and how the sharing of information is vital in the pursuit of the Wave, we think they’re probably on to a pretty good thing.

Clearly James Loren, founder of Surf Buds holds the same view as he enthused, “Surfers are hungry for knowledge related to the industry. By providing niche-specific content, Surf Buds satisfies its members’ needs while setting itself apart from other social networking services that are unable to serve up targeted content because they cater to a general audience.”

Does it deliver?
The site looks like it’s got the bones of what will be required to keep surfers Stoked, letting members upload their own videos, photos, surf reports, Web cams, etc.

From our admittedly limited look at the site (we joined, set-up an account and had a fiddle) it looks like there’s quite a way for it to go before it will induce a feeling of community.

From what we could see, there were no other member’s sites available for the looking at, so without these examples, it’s impossible to tell how popular it is. It would have been a wise move to build up a body of content before letting the world in to have a look.

Still … a good idea, so could work.

As with all social networks, this will thrive or die by how much it becomes used – how social people become on it.