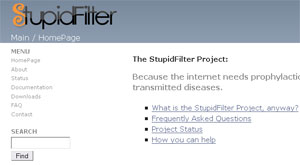 In an attempt to remove copious amounts of dumbness off web forums, a new open source application is being developed to detect and filter out “rampant stupidity in written English.”

Dreamt up by systems administrator Gabriel Ortiz and Paul Starr, The StupidFilter Project aims to make the bozo-detecting software available for free by the end of the year, with a Firefox extension following next year.

Gabriel Ortiz explains: “Too long have we suffered in silence under the tyranny of idiocy. In the beginning, the Internet was a place where one could communicate intelligently with similarly erudite people. It is time to fight back.”

According to their website, the project is currently in the ‘design and analysis’ phase, with the authors saying that they have gathered a fairly large (225K+) database of comments, mainly sourced from YouTube which they describe as an, “ever-inspiring font of stupidity.” 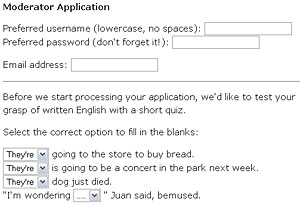 The software is designed to sit on the server side of a website and examine new postings for signs that the contributor is talking gibberish, looking for tell-tale signs like bursts of WORDS IN UPPER CASE, repeat letters (e.g. ‘grrrreeat!!!’) and geek-speak like ‘LOL’, ‘ROTFL’ and ‘YA RLY.’

So far, Ortiz and Starr have implemented a web-based comment ranking system to “seed their stupidity corpus,” with the final system being able to return failed posts back to the author with a suggestion that they need to be rewritten in propah English.

The StupidFilter Project (strapline: ‘Because the Internet needs prophylactics for memetically transmitted diseases’) is currently recruiting Internet users to help improve the filters, but applicants have to pass a short quiz to test their grasp of written English.

To be honest, we’re not convinced that this isn’t some sort of elaborate wind-up, but if it does come to fruition, we could imagine some web forums might get hit hard. Very hard indeed.