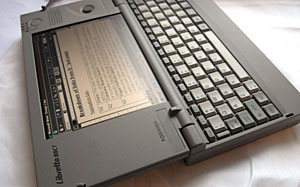 Yesterday we stepped back in time to review our old Toshiba Libretto 50, today we continue on that journey, looking at battery life and programs and give you our conclusion.

Battery
With something this small, battery life was never going to be too hot, and even when the Lithium ion cell was brand spanking new, we were hard pushed to get more than 70 minutes out of the thing – and that dropped dramatically if there was a modem or network card working in the PC card slot. 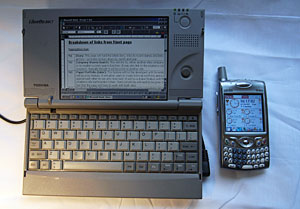 Control system
The keyboard is a fiddly fella though, and the control system – comprising of a textured trackpoint with the left and right mouse buttons on the lid’s rear – isn’t the most intuitive of things. Unless you you were careful with your movements, the cursor would end up flying around the screen like an alcoholic on amyl.

Running programs
We managed to upgrade the operating system to the white hot technology of Windows 98 and found the machine fairly stable in use. On fact, we grew rather fond of using the tiny Tosh.

We even managed to run Photoshop off the thing, as well as project college presentations from its external monitor output and even author a few websites, although we fancy it would collapse in a heap if it tried to install any modern RAM-hungry apps.

Conclusion
Despite its age and low specifications, the Tosh still impresses as a technical achievement. It still looks pretty damn small, the screen remains bright and crisp and there’s enough power onboard for basic surfing, emails and Word docs (albeit at a rather more stately rate).

One thing that has remained consistent over the decade is the the ergonomic limitations of shrunk-down computers.

You can ramp up all the groovy gizmos you like, but the price you pay for the portability factor remains a small, squinty screen and a challenging keyboard. 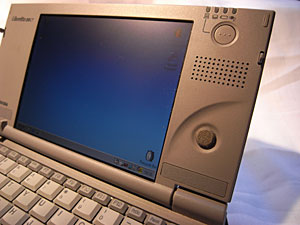 Until someone comes up with a screen and a keyboard that can fold out like paper (or maybe some cool Star Wars holo-projection device), small PCs – and indeed PDAs, smartphones and iPhones – are always going to be a bit of a pain to work with for anything other than short periods.

And that, as they say, remains the rub. Or iRub, if you like.