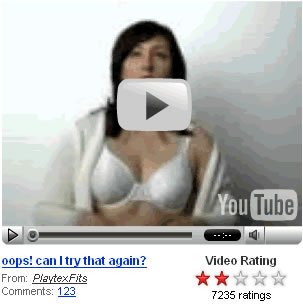 We know that Google is driven by advertising, right?

Well, since buying YouTube, they haven’t plastered the site with advertising, as a less savvy company might do, but they have played around a few times with raising revenue including adding promotions, supposedly linked to the video playing, at the bottom of the video, but above the playing controls.

We wonder if you’ve noticed that the top right corner of the YouTube site has changed in to an advert, not explicitly marked like so.

Playtex bloopers advert
A couple of days ago there was a Playtex video playing there, apparently of out-takes from the filming of the advert.

It very much played to what makes a video get clicked by at least 50% of the population – a woman with just a bra on. 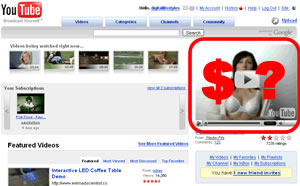 The video itself was, to say the least, very boring and that was reflected by the audience voting, which had it standing at two stars after over 7,000 responses.

With that level of low voting, it’s clear the video isn’t sitting there because everyone thinks it’s great, so there must be another reasons, like it’s being paid for.

Clearly placing the video advert on the front page works. Looking at it today, we can see that there have been over 4 million videos of it, compared with up to 17,000 with their others.

Given how many people have voted low for this video, I would suspect that Playtex have heavily moderated the comments given how many times the video has been seen – there’s only 168 comments.

For a company that we suspect is very keen with controlling the public image of a product, this raises an interesting problem – people rating the video cannot be controlled or moderated, while the text comment can. The disparity between the two of them points to them not being that open with the comments. 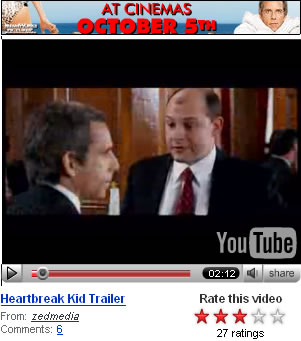 Today’s advert
Today, the same space is being filled with a trailer for a film called Heartbreak Kid.

This time it’s a little more obvious that the video in the top right corner is an advert, as there’s a mini-banner placed above it (first time I can remember a explicit banner on YouTube).

We’ll be watching that space to see who else can be persuaded to put their wares in the valuable top right spot.

How much?
Given there are no other adverts on the YouTube home page, we were wondering how much this space must be worth.

How much does an advertiser like Playtex have to pays for attracting over 4 million people to click to watch a video promoting their products?