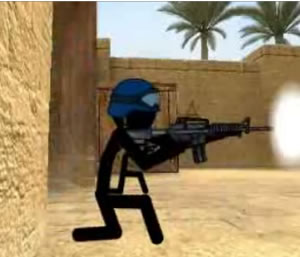 As you know, we love the mashup.

We’ve just stumbled across a great track/video that’s been created using the shooting sound effects from the video game Counter strike. You won’t be surprised to hear that it’s a track dominated by rhythm.

Beyond the genius of the musical idea, they’ve also animated a video of the whole thing too, using the Counter strike scenery as backdrops.

Looks like it’s been around since March 06, but this is the first time we’ve seen/heard it and we thought you’d appreciate it.

Video after the jump