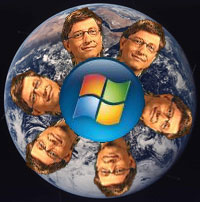 Microsoft has lost its appeal against a court ruling that they abused their dominant position in Europe.

In the courts words “The Court of First Instance essentially upholds the Commission’s decision finding that Microsoft abused its dominant position,” this is despite Microsoft providing their own shortlist of people they found acceptable to provide evident to the court and request to delay the hearing.

The summary of the actions are, the huge fine will stand, Microsoft need to remove the media player from Windows, open their software and bare a lot of the costs of the court case.

The fine was imposed by the European Commission, originally set back in 2004.

The record fine of €497 million would be massive for many other companies, but it’s reported that Microsoft is making over $1 billion dollars a month.

The Word From Microsoft
Microsoft’s response is limited currently, their General Council, Brad Smith has made a preliminary statement early this morning (video .wmv) in which he wanted to “Thank the court for the lengthy consideration that it gave to these issues,” (we always find this ‘thanks for finding against us’ stuff strange). He also pointed out that they’ve been selling a version of Windows [without the media player] that complies the court ruling, and that Vista is also in compliance.

He also said that “A lot has changed since the first judgement,” and that in the meantime they’ve made “agreements with Novell and Sun – two of the companies that were on the other side of this case.”

What’s next?
There are still avenues open to Microsoft including appealing to the European Court of Justice.

There’s a press conference on at 1:30 today, so tune back in to see the updates.