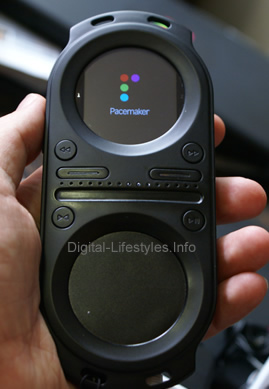 We were privileged to get our hands on the Pacemaker a while back – something we’d had a burning desire to do since we first heard about what the Pacemaker might be.

It’s a handheld DJ unit that packs a considerable punch – sufficient to make it realistic to play a whole DJ set using just the Pacemaker and no external units.

Slightly smaller than a vertically held PSP, it packs a 120GB drive; a colour display at the top touch sensitive cross-fader in the middle; circular selection pad at the bottom; a couple of buttons on each side and connectors on the bottom. 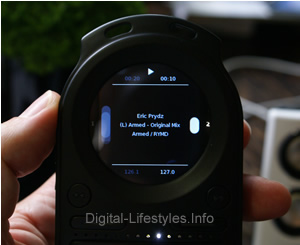 The version we played with was the only unit in the world at the time and made of a prototyping material, but still conveyed a quality feel about it. It’s clearly a device that has been deeply thought about during its creation.

Using the Pacemaker
The process of selecting tunes to play is simple for anyone who had used an iPod. The difference with this one is that before selecting the track, you select the channel that the track is to be played into – channel 1 or 2 – in readiness for mixing. The lower touch pad is used dial-right, dial-left style, a la iPod. The track list is displayed in the upper circle.

Once you’ve got a track in each channel – selected by round buttons either side of the cross fader – you’re ready to get mixing. 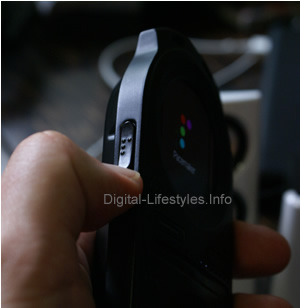 The Pacemaker automatically carries out beat matching, so all that is required to mix tracks is to watch the beat indicators on the left or right of the displays, getting them to pulse/peak in harmony.

Once happy with the sync of the tracks, the fade between the channels is performed by sweeping your fingers from side to side of the middle cross fader. With the touch-sensitive nature of the fader, left /right cut are made possible by keeping a finger on the left, while touching the right side.

When you’ve mastered mixing and want to get fancy, altering the frequency ranges during play is easy. Once the frequency to change has been selected. For example bass, the current level of that can be dropped or raised simply by using a sweeping action pro- or anti clockwise around the lower touch pad. A green circle appears with bright green showing the amount of change. The same method of controlling can be done with left/right pans.

The whole process is available for viewing on the video that we shot.

Exact price isn’t being discussed, but they say it will be “around the same price as an iPod.”

Never miss a great mix again
You know what it’s like, you’ve just performed what you though was one of your best ever mixes, but you weren’t recording it. With the Pacemaker this will never be a problem – every mix that you perform is recorded. Very cleverly they store the mixes as meta data, rather than just a capture of the audio, so not only are they small to store, but you can use them later.

It goes beyond the device
The ambitions of Tonium go well beyond the just producing a super cool device to mix tunes on. They already have music software in development (we saw an early version) that will allow you to download your mixes to your computer, alter them or share them with friends.

There’s more in store that we promised that we’d stay shtum about, but we can tell you it’s exciting.

DL Comment
We seriously rate this device and see it as the first device that we’ve seen that has a chance of making a dent in the dominance of the iPod.

The timing of this device is primed to take advantage of the public getting bored of ‘just listening.’ It also makes those twin iPod mixers that are floating around pretty silly … and potentially expensive.