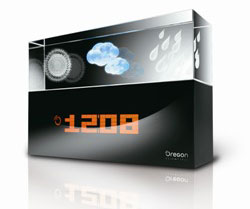 We thought our office was looking pretty hi-tech with the Oregon Scientific Wireless Easy Weather System Pro we reviewed last year, but its science-spoddy good looks have been comprehensively pwned by the company’s new BA900 Crystal Weather Station which – to paraphrase His Purpleness, Prince – has most certainly Got The Look.

Looking Star Trek-modern with its sci-fi icons and retro LCD readout, the Crystal Weather Station is topped by a chunky see-through acrylic block featuring three laser-engraved 3-D icons that light up in colour depending on the weather.

Seemingly floating in some sort of holographic holding bay from the future, these icons represent sunshine, precipitation and cloudy skies.

Lurking below, a stylish LCD display below shows the radio-controlled current time (beamed direct from a faraway atomic clock), while a Jean Luc Picard ‘make it so’ wave of the hand over the clock changes the readout to show the current indoor temperature. Do we like that? Yes, we do.

As far as we could see, the Weather Station can only currently be ordered via a mail order company in Australia and we couldn’t see any mention of a UK version being released.

Mind you, they’d have to make a few changes if they wanted to flog the weather station in good ol’Blighty.

We’d suggest that Oregon Scientific would need to get on the blower to their engravers and instruct them to start filling up that acrylic block with some approproate new icons for Britain’s weather.

We’ve no idea when the weather station will start hitting the stores around the world and even less of an idea if we’ll ever get them in the UK, although we did spot a quoted price of £130 on the web. There’s nothing listed on their UK website, but we’ll drop them a line and get back to you if we find out any more details.