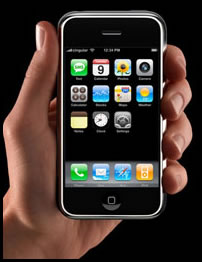 iSupply did one of their usual Teardown’s on the Apple iPhone, estimating that they are on a 55% margin for each 8Gb phone that they sell.

The Teardown involves taking new consumer devices apart, as soon as they’re released, and working out how much they cost manufacturers to build and therefore how much profit – or loss – the sale of each device brings.

Such is the influence of iSupply these days, the news of the very healthy margin appeared to cause a rise in the value of Apple’s shares, up 4.9%.

The bill of materials and manufacturing costs totalled $265.83, with the iPhone selling for $599.

Given the close-to-lunatic media coverage (you’ll have noticed that we’ve been rather restrained, if not a little dismissive of the madness), we suspect that there’ll be triples all around at Apple’s 1 Infinite Loop office and some big celebrations over the 4 July holiday in the US today.