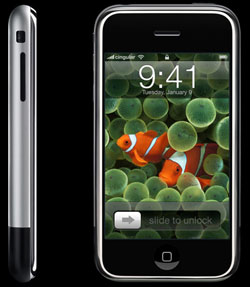 The most over-hyped event in the history of consumer electronics offered plenty of troubling insights into what happens when over-excited tech geeks come into contact with the object of their lust.

Starting with a mass public countdown on the street, the iPhone Launch TV channel coverage showed slavering first buyers for the iPhone gleefully charging into Apple’s New York Soho store and being treated like celebrities, with their every move being captured by banks of photographers and cameraman.

“Look! He’s walking up the stairs! He’s being served by an assistant! He’s getting out his chequebook! Oh my God, the iPhone IS GOING INTO HIS BAG! OMG! Zoom in! Zoom in QUICK!”

Near hysterical onlookers in the shop, perhaps driven close to madness in their worship of all things Apple, whooped, screamed and hollered as the over-excited fanboys trotted towards the store’s exit, punching the air like victorious warriors as they celebrated, err, successfully purchasing a mobile phone. In a shop.

Jogging out of the shop holding the phone’s black box triumphantly aloft, the new iPhone owners paraded through the crowds like winning athletes on a victory lap, brushing past envious bystanders who couldn’t stop themselves cheering and applauding them for their heroic feat of phone buying.

It certainly was some sort of weird collective tech-worshipping madness that managed to descend on the streets of New York, but it spread to the Internet too, with some media outlets finding it hard to write about anything else.

We came close to abandoning our favourite gadget site, Engadget, for the weekend when just about every single update was yet another breathless report about the ruddy iPhone. It got so bad that some of their regulars started to get uppity, forcing the tech site to issue an apology of sorts for their iPhone-a-thon. 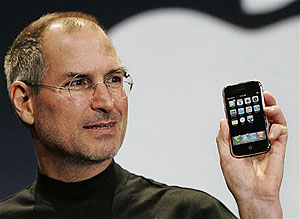 Elsewhere, Elizabeth Heichler at IDG wrote a good piece tracking the weekend’s media stories, while an article on Ars Technica reported that there were in fact, “giant piles of iPhones left,” adding that only Steve Jobs could get people to “wait in line for something that they didn’t need to wait in line for.”

Now that’s a buzz kill
Although most of the iPhone customers reported themselves as pleased as iPunch with their shiny new device, there were a few unhappy faces as some users had serious problems getting their iPhone activated.

Poor old Brad Bargman of Florida gave up nine hours of his life on Friday to stand in the queue only to find that he couldn’t get his iPhone activated, telling Channel 4 that it was a “real buzz kill” (a what?).

He went on to explain – in his own inimitable style – that he was now “soured on it a little bit,” but we’re sure he’ll get his buzz back real soon.