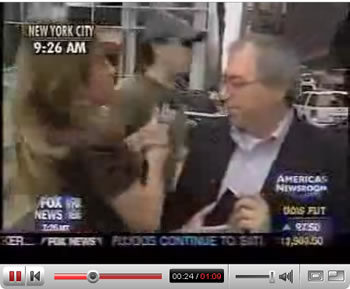 Just as it appears that the whole of America goes mad over the blooming iPhone, there are some there who have different priorities.

Fox News was in the street in New York interviewing Steven Levy of Newsweek who had an iPhone before their release (BTW, He’s posted on his blog how unsatisfactory he found blogging from his iPhone was).

Just as the ‘news’ watching people hear from the reporter that Steven was one of only four people who got to test the phone before it was released, some tricky rascal comes along and pinches the reports Mic – _Not_ the iPhone! (Brings to mind the iDon’tWantOne coverage that we published back in January).
Watch the video after the jump

You can’t hear the audio as the volume unless you turn it up _really_ loud, but for the reporting portion that really isn’t a problem as you probably don’t want to hear it anyway – shame we can’t hear the post Mic Swipe though.

When they cut back to the studio, we hear them apologise for the profanity, but sadly – despite re-listening to it many times we can’t clearly identify what it was. Given the studio presenters mentions “people having disputes with the media,” we guess the Mic Lifter wasn’t a fan of Fox.