The brilliant Private Eye, satirical magazine of the UK, has a fake advert for the Apple iPhone.

The headline? At last, from Apple – The iDontWantOne with a photo of the iPhone underneath it.

The gist of the jest is that it’s over-complicated for normal mortals and is highly likely to malfunction. After you’ve used the phone to call Apple customer support and tried to text them and failed, you can use it as an iBrick with a paper note attached to it saying “Why doesn’t your stuff work properly?”

The ultimate in hand-held technology! Now using the all-in-one device you can take a photo, download songs, play videos, access the internet and then with the iPhone you can ring up Apple to complain that none of the above facilities work. And if the phone doesn’t work you can text the customer services department – unless that doesn’t work either, in which case you can use it as a brick (the iBrick facility) to throw through the window of the Apple store, attached to a lo-tech hand-written note saying, “Why doesn’t your stuff work properly?”

Referring to the oft-used phrase of bad support departments, they have an insert with “Try turning it off and then on again,” underneath a photo of The Steve.

Given Apple’s legal-happy status currently, they may be contacting The Eye – not something that will phase them, they’ve had far bigger legal battles and won before.

Besides the great jests that Private Eye have against the irrelevant, they also carry out real journalism – actually investigating wrongs and exposing them – something of a rarity in most publications. 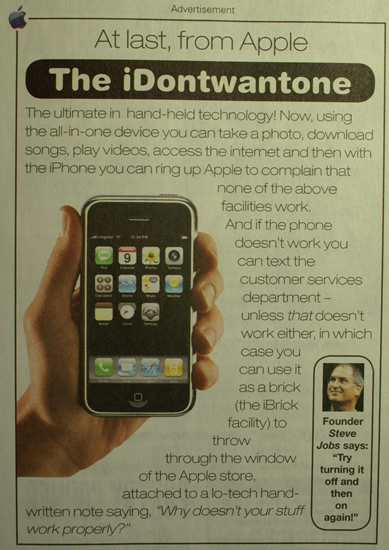